Android Phones Not Turning On Fix Ideas And Methods: Part 1

The phone not turning on fix is not an easy thing, since we have to check and test lots of circuits. This is why a phone repairer should be qualified with solid theoretical foundation. What is more, he must have rich experience as well.

Technically, we need to know what elements might cause the faulty. In short, there are four elements are essential for a phone turning on: clock, software, boot maintenance signal and power supply. For the reasons to a phone not turning on, though many possibilities, all are in the range of the four elements. That being said, which element should be test and fixed should be in accordance with the specific symptoms.

ESD is short for Electronic Static Discharge, which exists everywhere all the time. It is reported that human body can generates ESD as high as ten thousand volts. Hence chances are good that the motherboard is damaged without anti-ESD prepared.

Since anti-ESD is essential phone fix, so we need prepare some anti-ESD equipment. For instance: a grounded anti-static wrist strap, an ionizing blower, anti-static rubber mat, an anti-static glove and so on. 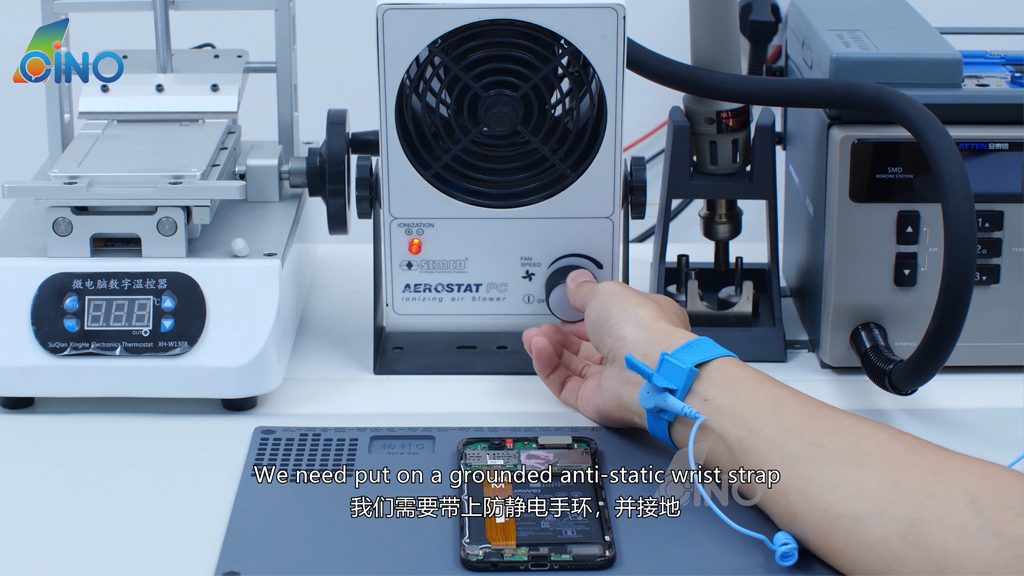 First of all, we need to do faulty analysis. The not turning on issue has different symptoms, such as auto power-off as soon as the logo shows up or hold down the power button but the phone has no response at all. As previously mentioned, the fix method should be in accordance with the specific symptoms. 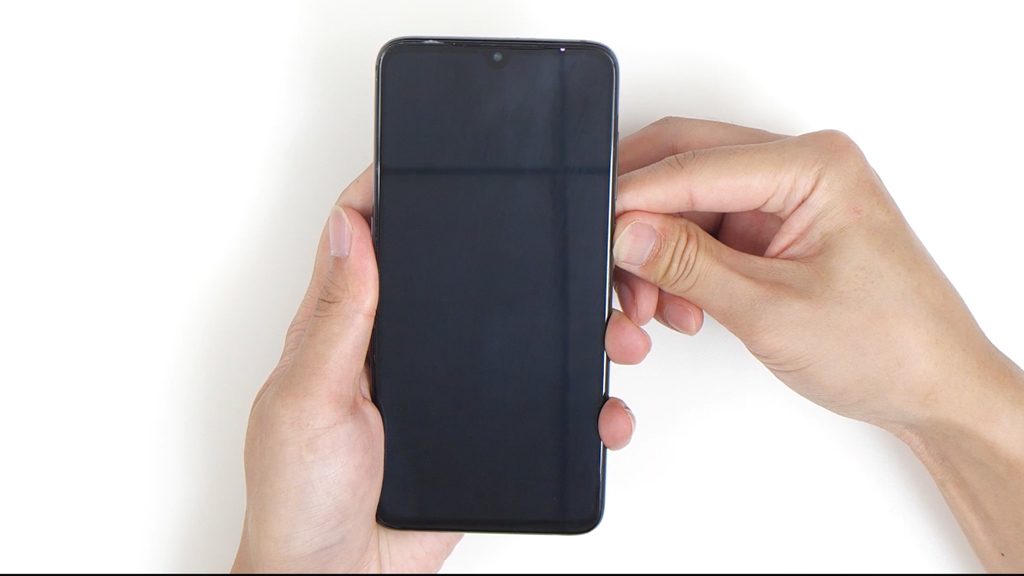 Not only that, for further analysis, we should connect the phone to DC power. Then measure the current on connection and on turning on. At last, deduct the faulty parts by the current value.

For instance, here is a Xiaomi 9 not turning on. Connect it to DC power and it will alarm large current instantly. Thus we conclude that the main power supply circuits VBATT or VPH hereby has been short-circuited.

After faulty analysis, we then know how to fix it. We will demonstrate three cases for your reference.

Case 1: Samsung A50 not turning on

Here is a Samsung A50 not turning on. To begin with, we check its power button and it works well. Then connect the phone to DC power, as a result, no current occurs. Lastly, test the main power supply circuits and there is no short circuit.

Under such circumstance, it is certain that clock circuit or PMIC has been faulty. Since PMIC replacement is easier, so we replace it and problem solved.

The OPPO R17 is stuck on Logo when power on. Connect it to DC power and test the current for power on. As a result, the value remains 150mA. Obviously, the system software has been missing. So we flash the phone and it can boot up normally. 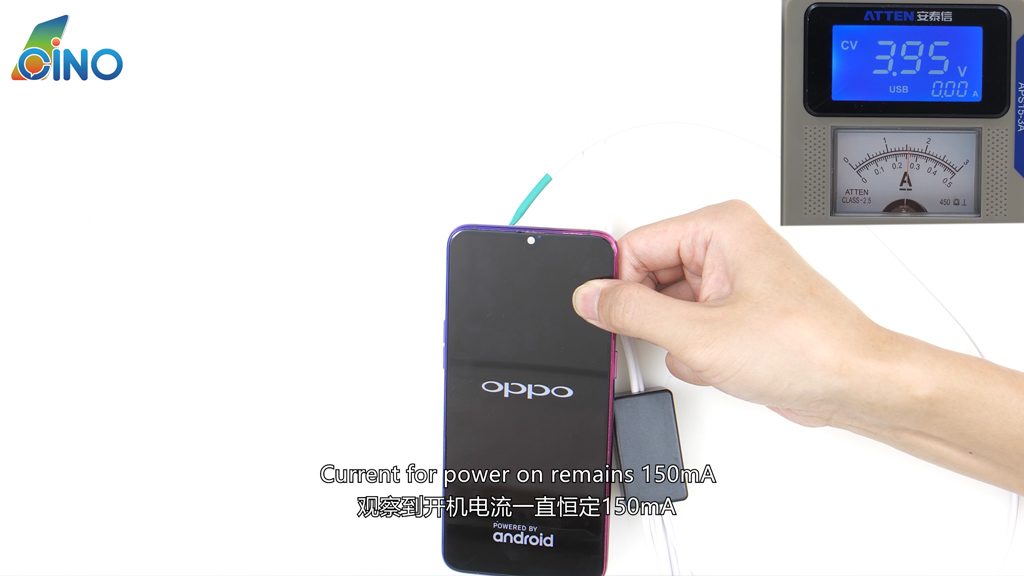 Boot up the phone but it has no response. Connect it to DC power and test the current, and the value is only 20mA, a very small one.

There are three possibilities for small current:

At first, we replace the clock crystal to fix the clock signal faulty, which is the most commonplace one. However, the not turning on issue still exists.

Then we test the main supply circuits, and it turns out that the C4310 has been short-circuited. 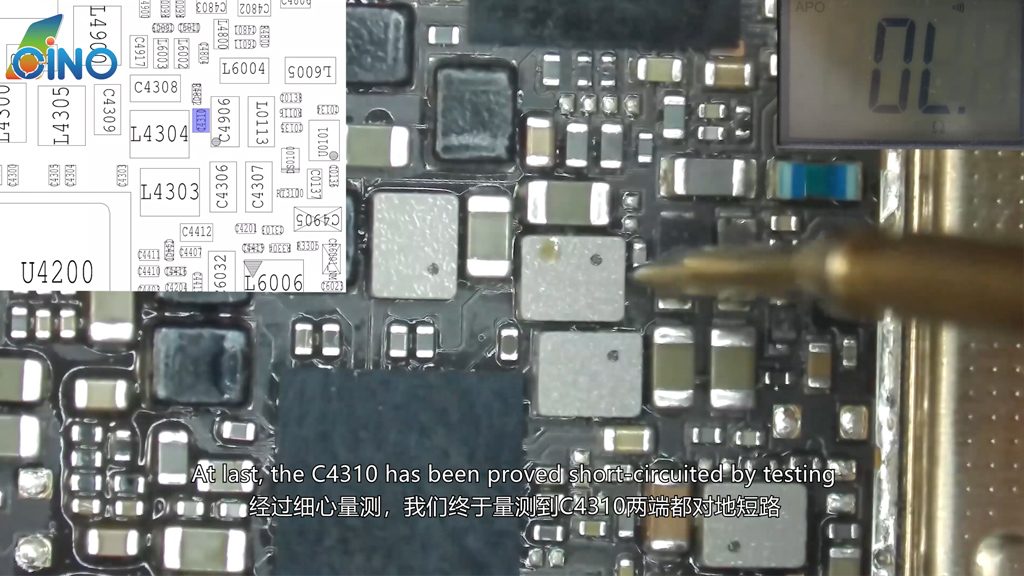 Check schematic diagram, PMIC supplies power for VDD_MODED on CPU via C4310. Therefore we test the PMIC and it has been short-circuited. So we replace the PMIC and problem solved.

We have share three cases for android phones not turning issue. However, that is far from over, we will continue to demonstrate more cases on next video.

For the detailed demonstration, please check: 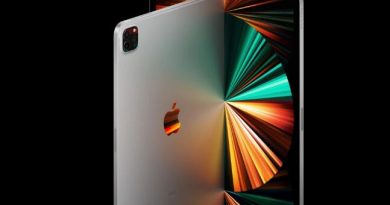